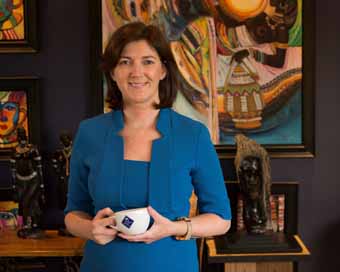 They’ve won a shedload of glittering awards and recently signed a headline contract with Aer Lingus  – but the team at Java Republic aren’t complacent.

And with good reason, quips Managing Director Grace O’Shaughnessy, who recalls the sheer sense of “shock” which enveloped this hugely successful, multi-award-winning company back in September 2008 just as it was about to move into a spanking new state-of-the-art manufacturing facility.

“Professionally, the biggest wake-up call for us was when we moved into our brand-new 25,000 square foot carbon-neutral roastery in Ballycoolin, Co Dublin, in 2008.  We moved in at the first hit of the downturn,” recalls the dynamic 39-year-old who previously worked at Lir Chocolates.

The company – the original Irish hand-roaster – was quite literally only weeks from its much-anticipated move into beautiful new premises when the country was rocked by an economic tsunami. “We went in anyway – we had no choice,”  recalls O’Shaughnessy wryly.

Needless to say, the firm, which makes coffee and sells tea and ancillary products such as coffee machines, was not immune from the shockwaves which followed the downturn and threatened to overwhelm the country:  “The market went flat. Consumers cut back on their coffee spend and nobody could get finance,” she recalls, describing that year as “a very difficult and turbulent time.”

All Java Coffee could do, she recalls, was to put its head down and doggedly trade out of it: “What kept us afloat was our belief in our product.  We are very proud of what we do and we are transparent. We believe in our product and we believed in fighting for the business we had built.“

“We have a very close management team. We never compromised on the quality of our product or our service – but we reviewed every facet of our business and cut costs.” There was just one redundancy. Everyone else chose to take a salary cut and a pay freeze, she recalls.

It was a policy which paid off – back in 2008 the employee headcount was 27, now 42 people work there. “We kept our heads. We talked a lot. We got good advice from a number of experienced business people and we took that advice. It paid off,” recalls O’Shaughnessy who formerly worked with the well-known Kylemore Bakeries, whose flagship line was the popular Cuisine de France bakery. “We steadied the ship in 2009 and things started to pick up again in 2010.”

Now, just over half-way through 2015, the future is looking bright. Not only did the firm experience a double-digit growth last year – and is on track to do the same this year – but Java Republic has recently been announced as the new on-board coffee supplier for Aer Lingus short-haul routes, Its filter coffee is now part of Aer Lingus’s on-board ‘Bia’ menu.

“We’re delighted with our partnership with Aer Lingus as of two months ago! This is progress on from our partnership of 2014 which saw two of our specialty teas become part of Aer Lingus’ on board menu,” she explains.

Aer Lingus wanted to raise the bar and give its guests a better beverage – and it has, she quips! Looking back now, says the Wicklow native,  Java Republic managed to get the really important things right – and it has paid off handsomely.

“I think we went into the recession in the first wave of companies which were hit by it. We took it head on and it was a case of battening down the hatches and steadying the ship.” To date the company has won more than 125 Great Taste Awards in the UK – and that’s a track record that looks set to continue.

And in the meantime the coffee industry in Ireland has exploded in terms of the arrival of artisan businesses – there are now more than 20 roasters in Ireland,  O’Shaughnessy  points out, adding that  customers are generally more discerning, more sophisticated and more widely travelled. They will often want to know about the provenance of the coffee they’re drinking.

“Customers will regularly ask for information about where the coffee beans come from and how they are processed – have they, for example been washed or dried,” she explains.

This educational role is something Java Republic welcomes, she says, and the company increasingly sees itself as a partner with the client in imparting information about the product. “As a roaster we see ourselves as educating the customer about the coffee – and about what is  good coffee!”

Things are looking up not just for Java Republic, but for the Irish coffee industry, she says – something which is underlined by the announcement that the sector is set to host the 2016 World of Coffee and the World Barista Championships.

“They were in Gothenburg this year. It means that more than 60 countries will come to Dublin – and that is a measure of where coffee in Ireland is at now,” says O’Shaughnessy with no small amount of pride.