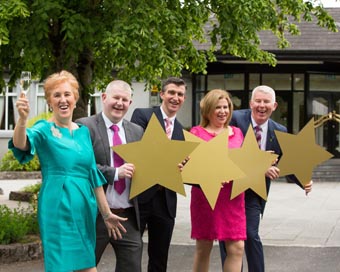 A €1m refurbishment project has delivered four-star results for Adare’s Fitzgerald family as Fáilte Ireland has added an additional star to the rating of their County Limerick hotel, Fitzgeralds Woodlands House Hotel & Spa.

The family run property, which is a founding member of the Irish Country Hotels collection, began life 40 years ago as a four-bedroomed bed and breakfast (B&B) run by Mary and Dick Fitzgerald as a way to supplement their farming income.  Today, it is an 89-room four-star hotel employing 200 people.

Proprietor Mary Fitzgerald said that being awarded a fourth star is an honour for the entire team.  “Over the last 18 months, everyone at the hotel has got behind the ‘four star’ project.  We have given the public areas of the hotel and a large number of the bedrooms a complete make-over and have also looked at ways in which we can offer an enhanced level of service to our guests such as introducing an ‘executive package’ for people staying with us on business,” she said.

As well as running a busy hotel, restaurant and spa, Mary Fitzgerald and her children (David, Elaina, Conor and Richard) are actively involved in the hospitality industry at a regional and national level.  Mary is a founding member and Group Chair of the prominent Irish Country Hotels collection which, with its sister portfolio Manor House Hotels, is the largest group of independent, family owned hotels in the country.