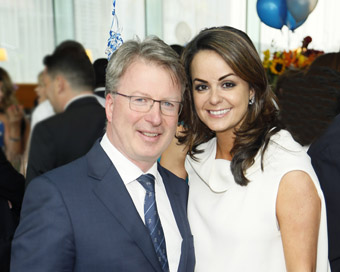 FleishmanHillard Ireland celebrated its 25th anniversary last night at an event with An Taoiseach Enda Kenny TD as guest of honour. Over 200 leading figures from media, business, entertainment and politics attended the party at The Marker Hotel in Dublin’s Grand Canal Square, along with the firm’s 40 Dublin based staff.

The celebrations kicked off with an address from An Taoiseach along with speeches from Managing Director of the firm Rhona Blake and the founder of FleishmanHillard’s Irish operations, John Saunders who is now regional president for FleishmanHillard EMEA.

Commenting on the occasion, Rhona Blake, managing director of FleishmanHillard said “We are delighted to celebrate this milestone anniversary with so many friends of the company. As a team, we have been lucky to work on many of the most high-profile and exciting events to take place in Ireland over the past 25 years and  we are so proud of everything we’ve achieved, the clients we’ve worked with and the wonderful relationships and friends we have made among the media. With a team of 40 PR professionals, we have the strongest talent and creativity in the industry. We look forward to continued growth and success over the coming years.”

In 2013, it became the first and only Irish communications agency to win the most prestigious PR Award in the World – The Cannes Lions Award for Creativity. FleishmanHillard was also the first PR agency in Ireland to appoint a Creative Director.