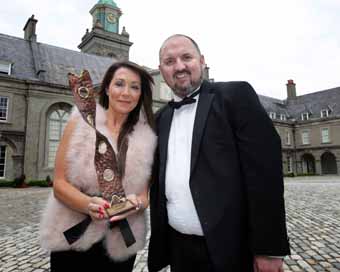 Two female-led businesses were among the winners at the 18th Annual National Enterprise Awards, organised by the Local Enterprise Offices and announced yesterday evening by the Minister for Jobs, Enterprise and Innovation, Mr. Richard Bruton T.D.

All five winners were among the 24,000 small businesses supported by the network of 31 Local Enterprise Offices last year. The National Enterprise Awards were set up to celebrate the achievements of Ireland’s micro-enterprise sector and previous winners have included Irish Yogurts from West Cork, Hot Irishman Irish Coffee (Walsh Whiskey Distillery) from Carlow and DesignPro from Limerick.

Prizes include a cash prize of €5,000 for the Overall Winner, €1,000 for the four Category Winners in addition to specially-commissioned trophies.

Adrienne Rodgers, Chair of the organising committee with the Local Enterprise Offices said: “Small business owners are the risk-takers, the innovators and the job creators that form a key part of the enterprise ecosystem here in Ireland. They have all demonstrated true grit and determination, choosing not just to survive but to grow and establish their businesses even further.”

All five winners are:

Footballer Stephanie Roche has been named as...

The Institute of Designers in Ireland is...