All Ireland Manager of The Year Award Winner 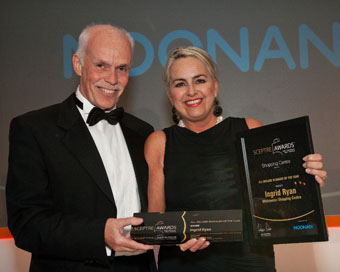 Whitewater Centre Manager, Ingrid Ryan has won ‘All Ireland Manager of The Year’ at the 2015 Spectre Awards.

Over 450 shopping centre and industry professionals attended the awards ceremony. Facing intense competition from all over Ireland, Whitewater’s Ingrid Ryan was chosen for the top award of “All Ireland Manager of The Year” and was presented with a commemorative trophy by John O’Donoghue, CEO of category sponsor company Noonan.

Commenting on the award, Ingrid Ryan noted: “It was such a privilege to have been shortlisted for this year’s award. To win the award is an honour and I am thrilled. I am very grateful to Spectre and to all of my team at Whitewater for working with me to make Whitewater the success story that it has become. As Ireland’s largest regional shopping centre, we pride ourselves in offering a 5 star customer service and experience. We would not be here without our loyal customers and the local Kildare community and always try to give something back”.

Under her leadership, Whitewater has earned its place as Ireland’s largest regional shopping centre. Whitewater also enjoys an excellent relationship with Kildare GAA, supports fundraising initiatives for local charities and is proud to support Down Syndrome Kildare as their nominated charity.

Would you accept a lower...

According to a recent Robert Walters survey,...

This year's IGNITE Awards and Showcase...