Foróige Youth Entrepreneur Of The Year 2015 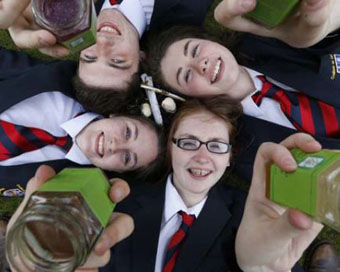 Yesterday in the Mansion House in Dublin, the Youth Entrepreneur of the Year 2015 was announced. Milseog Na Mara, who produce jellies and sweets using seaweed, took home the top prize. It was set up and run by Mary Kate Carr (15), Aimée Byrne (16), Rebecca McShane (16) and Ronan O’Hare (15) from Donegal

This competition is being run by the Foróige Network for Teaching Entrepreneurship (NFTE). The six finalists pitched their businesses to a panel of judges from some of Ireland’s leading companies as they battled it out to be crowned Youth Entrepreneur of the Year 2015.

The other finalists were:

– MURE – produces and sells briquettes made from dried cow manure. Set up and run by Leitrim teens Linda and Clare Dolan (16)

– School Space Solution – a shelf system for student lockers. Set up and run by Erica Masterston (15) from Blanchardstown in Dublin

– Unique Hold – offers personalised grips for hurling sticks. Set up and run by Aisling Farrell (14) from Clonee in Meath

– Tom & Dane’s Kitchen – produces a range of chutneys and jams. Set up and Run by Tom Williams (15) and Dane Fogerty (17) from Tipperary

– Candles4U – produces festive log candle holders. Set up and run by Alex Conroy (16) and Craig Lynch (16) from Coolock in Dublin

Approximately 1,000 teenage participants in Ireland have generated €250k turnover as part of the Foróige Network for Teaching Entrepreneurship (NFTE) Programme in the past year.

Google Is Ireland’s Most...

Google has been named the most reputable...

Sonia Flynn Will Move To...