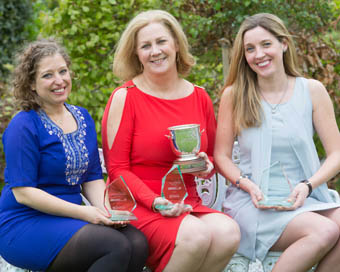 The Network Ireland Cork Branch Businesswomen of the Year award winners were announced on Friday 15th by Moya Doherty at a luncheon in the Radisson Blu Hotel and Spa in Cork.

The three award winners will go on to represent Cork at the Network Ireland national final in September along with the winners from other county networks.

– Businesswoman of the Year – Self Employed: Noeleen Cronin, Owner and Managing Director, Home Instead Senior Care.

The Overall Winner of the Network Ireland Cork Branch Businesswoman of the Year 2015 was awarded to Noeleen Cronin, Owner and Managing Director, Home Instead Senior Care who was presented with the Keanes Jewellers Perpetual Trophy.

Speaking at the event Network Cork President Helen Wycherley and Director Celtic Ross Hotel said, “We were honoured to have the Chair of RTÉ and of Riverdance distinction Moya Doherty as our guest speaker. As a recipient of many awards throughout her own dynamic career, which spans theatre, radio and television production, both in Ireland and the UK, we were enthralled by her exciting and diverse story”.

See more photos from the event in our ‘Be In The Frame’ gallery.

In recognition for its work in in the...