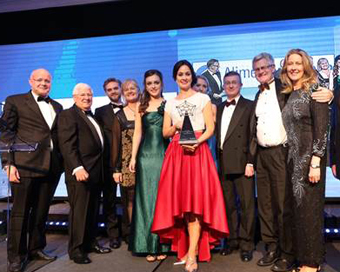 In recognition for its work in in the development and commercialisation of precision probiotics for digestive disorders, Alimentary Health has been awarded winner of prestigious 2015 US-Ireland Research Innovation Awards in the SME category at an awards ceremony on May 17th.

Developed by the American Chamber of Commerce Ireland and the Royal Irish Academy, these awards acclaim exemplary ideas, originating in Ireland, which have made a social and economic impact through research and innovation.

Alimentary Health was recognised specifically for its global innovation in developing B. infantis 35624 a patented precisionbiotic™ supplement, now available over-the-counter. Marketed in Ireland and the UK by Alimentary Health as Alflorex®, and by Procter & Gamble in North America as Align®, B. infantis 35624 is the ‘No. 1 Gastroenterologist Recommended probiotic strain in the US’.

(Pictured: Holding the award in centre is Dr Eileen Murphy, Clinical Director of Alimentary Health, with the rest of her team.)

56% of firms involved in cross-border sales...