Melissa Curry: Made From The Heart 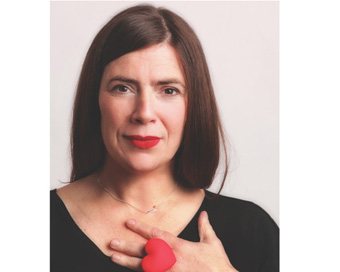 With a CV that ranges from Paris boutiques to global brands in New York, Sligo-born jewellery designer Melissa Curry has been down, but she’s never been out. Her story is really just beginning.

You might remember the name Melissa Curry from that billboard ad for Liberty of London’s Millennium campaign. Or from the Obama inauguration, when one of her pieces was An Taoiseach’s inauguration gift to Michelle Obama. Or from Oprah’s mentions of her pieces. Or, even, from your nearest Kilkenny shop. She’s not – yet – a household name, but this passionate creator of beautiful things is something of an unstoppable force, despite the hurdles life has thrown in her path.

Curry worked with some of the world’s biggest brands like Philippe Starck, Toni & Guy and Absolut throughout the 1990s before landing a contract in 2001 with Liberty of London, her products starring in the company’s Millennium campaign. An unexpected pregnancy, a relationship breakdown and her baby son becoming seriously ill changed her life completely.

“I came from the inside, and during that period I was on the outside, on the parameters of life itself. Coming back to Ireland had not been on my list of priorities… my world had unravelled.” She knew coming back to Ireland would be difficult – particularly, she says, as a single mother – and it proved just as hard as she’d expected.

For someone who had her dream career, with the life of an international jet setter and working on something she was so passionate about to suddenly be slotted into the life of a jobless single mother, having to start again was tough. But this, she says, has inspired her.

Having travelled widely throughout her childhood, Curry was always aware of issues in the developing world and particularly what she sees as the strength and endurance of women who “just pick themselves up and brush themselves off” after every setback.

Encountering adversity herself made her realise that “a woman’s income is her passport to opportunity, security, options, and to freedom”. An idea was born. Her ‘Success’ collection, designed for women to gift to one another, symbolising feminine strength and the idea of independence from income. A delicate charm in the form of an exquisitely dainty gold bar featuring the word ‘success’, it’s subtle, pretty, and powerful.

While the ‘ Success’ range is her best-known, Curry is forging ahead with new collections like ‘Tropical’ and ‘Bloom’, dazzlingly colourful pieces in playful materials like acrylic, ribbon and rubber, for a more fun aesthetic. It’s high end design but with a sense of fun.

Like many creatives, Curry struggles with some of the business end, noting difficulties accessing investment in Ireland, partly, she says, due to the lack of a critical mass in the industry.

“I never really realised the breaks I got when I was younger, at the time, but now I’m building the strategy to get those again. Ireland is so small that we don’t really have an industry, it means your reach is diluted and you have to go a lot further and aim higher. You need extraordinary energy, persistence and determination.”

“Trying to pitch to Irish venture capitalists is not the easiest. This is high risk for someone who really doesn’t understand the market and you can get pooh poohed in Ireland for something that, if you went to New York or London with it, would be totally normal.”

She is critical of how business is done in Ireland, finding a lack of directness and communication that frustrates her. Internationally – such as in dealing with Virgin Airlines – it’s a different story;

“I sent one email and within four hours the top girl in innovation got back to me. Trying to ring somebody here…!”

It’s clear that Curry knows what she’s up against, but Virgin Airlines – a brand ‘fit’ if ever there was one – loved a recent limited edition ‘Success’ line for International Women’s Day which involved a woman’s group in East Africa manufacturing the special linen packaging.

As for what’s next? “The Melissa Curry brand will continue to develop, process and design and work on an international level, seek to re-enter markets and hopefully get back to Liberty,” explains Curry.

Positive messaging is the key with these pieces, and although the funding process is frustrating, it’s clear that Curry is taking her own messages to heart. Those rollercoaster years have taught her that life can change unexpectedly, and when WMB brings up a move to London or New York, she says “not yet”, but never say never.

“I hope we will be a bigger part of that bigger world in years to come. I’m a supplier now for Facebook, and for Virgin, and it’s about identifying the companies you want to be with, reaching for the top and believing it can happen.”

Fiona Carney’s career path has been...