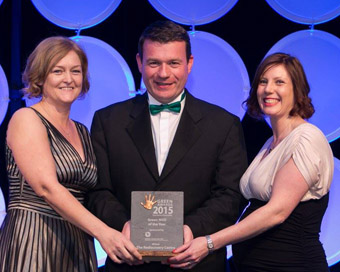 On Wednesday, April 8th at the DoubleTree by Hilton Dublin, many of Ireland’s green sector were recognised and celebrated in front of an audience of almost 450 senior executives.

Hosted by comedian Neil Delamere, 24 trophies were presented to the best leaders and organisations within Ireland’s green industry as part of the Green Awards 2015.

Among the winners were Sarah Miller and Tara Singleton, The Rediscovery Centre, who were awarded for the Green NGO of the Year 2015. The Rediscovery Centre is a social enterprise dedicated to providing community employment and training via innovative reuse enterprises which use waste and unwanted materials as a resource and raw material for new product design. The company is based in North County Dublin and is run by CEO Sarah Miller.

The full list of winners can be seen here.

The Governor of the Central Bank of Ireland,...

An early-stage business idea to...