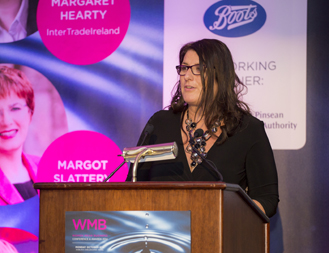 I launched WMB nine years ago to place a spotlight on businesswomen and female entrepreneurs, which is a worthy objective.

However, both men and women will lead the change necessary in the coming decades.

So it begs the question – what can we do in order to enjoy a more positive and balanced voice in business and in life?

Here are my five actions, which won’t necessarily surprise you but will focus the mind!

– More women needed at a political level. As of January 2015, there were 152 heads of state worldwide only ten of which are women. The IPU (Inter-Parliamentary Union) highlighted women’s participation in parliament and top of the list was Rwanda with Ireland lagging well behind at 85th position! Although we enjoy improved representation in Dáil Eireann at 15 percent, it only reflects an increase of 5 percent in almost four decades. The solution – women account for 50 percent of the population, and can therefore exercise signiﬁcant voting power. We need to seek – no, we need to demand change in the way politics is carried out and openly support our sisters who are brave enough to put themselves forward as champions of political change. Check out ‘Women for Elections’ (womenforelection.ie) the not-for-profit, non-partisan organisation established to assist in this challenge.

– More female representation required at board level. As of this month, the number of women on FTSE 100 boards had reached 23.5 percent with 18 percent on the FTSE 250 boards (source: Cranfield School of Management). Only 17 more female appointments are needed across the FTSE 100 boards to reach the target set by Lord Davies (the former UK trade minister) of 25 percent. For the moment, this is a voluntary ‘ask’. However positive you may find this news, Dr. Elena Doldor, co-author of the Cranfield benchmaking report, believes that women’s representation on boards will stagnate at around 28 percent. Her reason – ‘There are still not enough women on executive committees or in the executive pipeline”. Her solution – “Introducing aspirational and measurable targets for women at all levels is the only way to achieve real progress”.

– Close the gender pay gap. It is estimated that women earn anything between 3 and 17 percent less than their male counterparts. In the European Commission’s annual report on equality, it shows that Irish women earned an incredible 14.4 percent less than men (2012 figures) – while four years earlier the gap was 12.6 percent. It looks like we’re going in the wrong direction on this one! Of those working (56 percent in 2014), only one third of managers were women with over-representation among clerical support workers – 80 percent of those working in this sector in Ireland are women! Yet, I was only reading an article in one of the broadsheets with the header – Overqualified and under-employed…’Ireland has the highest percentage of overqualified workers in the EU’…. So clearly educational prowess is the not stumbling block for career advancement! I am reminded of ‘The women of Dagenham’ who fought for equal pay back in the 1960s and they found a politician – Barbara Castle – who shared their feelings for fairness. This unlikely relationship culminated in the Equal Pay Act of 1970. Who is our Barbara Castle of the twenty-ﬁrst century?

– A balanced approach to childcare. Women are fortunate to experience motherhood in all its facets. Although we are stretched both physically and emotionally by the process, the gift of childbirth has no comparison. However, women need to be true to themselves as they juggle the roles of carer and career girl. Look at women in education – over 60 per cent of EU university graduates are female. What happens to this fantastic talent pool, as women certainly aren’t represented at decision-making levels? Out of choice, many women decide to opt out of the race in exchange for a more balanced life. Others want to continue on their career paths but are knocked back continuously. Only when men can and want to take on a greater role in child rearing will the status quo change. I’m not advocating increased maternity leave for women. I am strongly in favour of leave being shared between both parents. No one gets left behind, no single career is compromised and a child beneﬁts from both parents, where possible, in the process.

– More visible female role models. The adage ‘Seeing is believing’ comes to mind. Unless we see a big increase in female role models across the various disciplines, particularly in the area of technology and science, very little will change. Our daughters will only aspire to less ‘traditional’ career paths in life if they are encouraged by example. With huge respect to the men that I do admire, it has been a ‘man’s world’ for far too long – it is now time for change.

This is an edited and updated extract from Rosemary Delaney’s book: Women Mean Business: One Woman’s Journey into Entrepreneurship (2011).

Why Be An Entrepreneur!