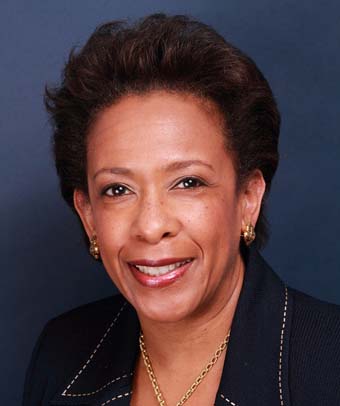 Loretta E. Lynch, the former US attorney for the Eastern District of New York, is the first African-American woman to hold the position of US Attorney General.

She was nominated in November 2014 by President Obama but the decision was delayed in the Senate until last week. She was sworn in yesterday by Vice President Joe Biden.

President Obama named her U.S. attorney for Eastern New York in 2010 and this covers Brooklyn, Queens, Staten Island and Long Island. She served in this role under the Clinton administration too from 1999-2001. While U.S. Attorney, Ms. Lynch was a member of the Attorney General’s Advisory Committee, serving as Co-Chair of the White Collar Crime Subcommittee. She was a frequent instructor for the Department of Justice in their Criminal Trial Advocacy Program and served as an Adjunct Professor at St. John’s University School of Law.

Lynch charged reputed mobster Vincent Asaro and his associates for the 36-year-old heist of $6 million in cash and jewellery from a Lufthansa Airlines vault at John F. Kennedy International Airport, which was dramatised in the blockbuster movie Goodfellas, according to Mashable.

She graduated from Harvard College and Harvard Law School, has been a federal prosecutor and also worked at several private law firms.

Google has appointed Ruth Porat as its new...

Alison Brittain Will Head Up...