Posted In: The Topic | WMB Careers 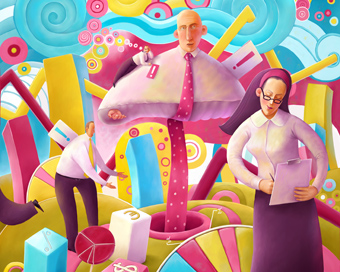 “Excellent job. Clearly a lot of effort went into this piece.”

That’s your manager praising the efforts of your colleague. You know the colleague who always leaves the office early and is generally known as lazy? Yes – him.

Despite burning the midnight oil most nights of the week and going the extra mile, all you get are the scraps of praise your manager can spare. Are you asking yourself why you bothered investing those additional hours? If you aren’t, then you should.

A recent piece in The Economist (‘Proof that you should get a life’) reminds us that working longer doesn’t necessarily lead to higher output. In fact, the very opposite. Stanford University’s John Pencavel demonstrates in his paper that reducing working hours, which some might point to as an indicator of laziness, could actually be good for productivity. His study focused on data from the munition sector during the First World War where he found that beyond 50 hours a week, output per hour starts to fall. Although the data was collected from a female-dominated workforce, there are lessons to be applied in today’s more male-dominated service-oriented organisations.

For some of us, this isn’t news. We’ve all been told about the merits of working smart not just working hard, but with the barrage of emails, meetings and never ending to-do list, it can sometimes feel like ‘working smart’ is a somewhat elusive ambition. Despite our best efforts to filter, prioritise and focus, we find ourselves still juggling all the same balls, if not adding more balls to the act. But rather than keep juggling, we should challenge ourselves on the amount of effort we invest, what we deliver and if we risk our health and potentially burn out early.

In our input-focused and face-time driven world, the merits of working fewer yet more productive hours have either not been embedded in, or even found their way to many of our organisations. To “clock off” early is still frequently interpreted as a lack of commitment and a factor that could be unintentionally considered during performance reviews. In reality, colleagues are all too hasty to label with the big L-word. Being both lazy and successful is perceived to be a contradiction.

The general perception of senior executives working crazy hours doesn’t help us move away from this idea that you can’t have success without putting in the long hours. Marissa Mayer, CEO at Yahoo, is said to have put in 130 hours some weeks when she was at Google. Harvard Business Review surveyed 483 senior managers and executives, and found that 60% of those who had smartphones were connected to work 72 hours a week. That feels like a lot – 22 hours above our peak 50 hour productivity levels.

Realistically there will be times when we do need to work longer than we would like, but more important is appreciating that doing so regularly is not a prerequisite to success. Some executives are being more vocal about getting the balance right – stories we need to hear more often to ensure we don’t teach the next generation the bad habits and inefficiencies of being unnecessarily “so busy”.

In Lucy Kellaway’s recent article, she references the former head of the German army, Kurt von Hammerstein-Equord who used 2 scales (clever versus dim, lazy versus energetic) to assess his officers. It turns out that the most successful field commanders who were able to deliver fell in the clever-lazy quadrant of the matrix. The message therefore is not to be lazy without purpose, but to use it to be a lot more ruthless about how you use your time.

The first step in achieving this goal is to admit that most of us are inefficient to some degree, and there are many other things we could be doing with our time. A 2013 study by Pew Research Centre found that as a result of work, 46% of fathers and 23% of mothers felt they were not spending enough time with their children. The women who took part in the survey spent about 14 hours a week on child care compared to the 7 hours men spent. Time going into extra hours in the office – but is it all worth it?

The Economist journalist writes: “Output at 70 hours of work differed little from output at 56 hours. That extra 14 hours was a waste of time.” That is a hard pill to swallow – particularly if you are ambitious and believe that putting in the hours will help you progress on an accelerated career path (I put my hands up to falling in this group).

How can we make the L-label a goal rather than a contradiction, and do so in such a way that our careers are not negatively impacted?

We need to debunk the myth that longer hours equates to success, and organisations need to face this head on as they continue to work on developing more inclusive and flexible cultures. Ensuring that performance management is focused on outcome rather than input is essential, and initiatives like ROWE (Results-Only Work Environment) go some way in addressing this by demonstrating that focusing on outputs can result in a 30-40% increase in productivity.

How does one purposefully become more ‘clever-lazy’? It’s clearly not as easy as deciding to shut down every day at 5pm. Being both strategically lazy and successful relies on a number of skills but here are two steps you can work on immediately.

Making ‘clever-lazy’ work for everyone

Our organisations need to develop more inclusive cultures which enable clever-lazy employees to thrive, which in turn leads to increased firm productivity. The employee who works from home should not necessarily be perceived to be lazy in their productivity when some studies have shown that working from home could increase performance by 13%.

Next time your manager recognises effort in the team, rather than wonder why she or he has not taken into account the long hours you invested, celebrate the fact that they are focusing on output rather than input.

How To Build Your Business By...

Football fans – they can get pretty...

In an effort to combat stress, or at least...

It has been my experience that women don’t...