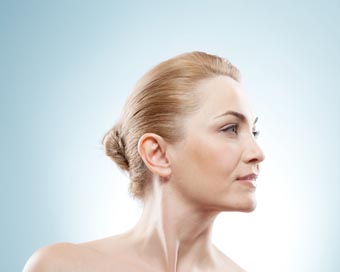 You’re finally getting to where you want to be – you’ve climbed the career ladder, earned promotion and are enjoying the benefits of a senior position and good salary.

The kids are older and more self-sufficient, the household has settled into a manageable routine and you’re finally getting your life back – then, without warning, a mind-blowing array of symptoms hijack your days and wreck your nights. These include any or all of the following; heavy night sweats which disrupt your sleep and leave the sheets drenched, embarrassing day-time hot flushes, panic attacks, moodiness, irritability, anxiety, forgetfulness, heavy bleeding, facial hair and feelings of insecurity, depression, isolation as well as a drop in self-confidence.  And that’s just for starters  – you may also have noticed that you’ve started suffering from urinary incontinence, hair loss, weight gain, a reduced sex drive, vaginal dryness and breast tenderness.

But these symptoms don’t just affect the unlucky few – most women have good cause to view the menopausal tick-tock with some trepidation.  A study carried out by the Women’s Health Research Program at Monash University in Melbourne and published last month, analysed data from a study of more than 2,000 women across Australia between the ages of 40 and 65.

It found that 74% of women under 55 and 42% of women between the ages of 60 and 65 years reported having hot flushes and night sweats.  Another recent study, also carried out in Australia, found that two thirds (or 67%) of more than 800 women between the ages of  40 and 75, experienced problematic symptoms. Interestingly, researchers at La Trobe University and Monash University in Melbourne, also looked at how menopause affects women at work – and with larger numbers of women in the workforce than ever before, their findings should give employers and governments pause for thought.

Results from the survey, which was carried out last year, indicate that the severity of the symptoms was an issue at work.  If a woman had one of the major menopausal symptoms such as fatigue, disturbed sleep or anxiety, the study found, it influenced how she regarded work.

And crucially, the findings indicated that many women needed more managerial support going through the menopause; otherwise their experience could be lost to the workforce.  However, it emerged a tiny one percent of all survey respondents reported that their employer had management awareness training about menopause at work. Only three percent reported that their workplace had informal support networks that help women going through the menopause.

Women who reported that anxiety was a problem for them indicated greater intention to leave their employment.  They also experienced less job satisfaction and were less engaged at work than those who did not report anxiety as a problem.

In Ireland too, menopause is not something which appears to be foremost in employers’ mind – a number of companies contacted by Women Mean Business declined to comment on the subject when asked about policies in place to specifically deal with the condition. The Irish Business and Employers’ Confederation, IBEC, said merely that while there was no specific policy on menopause, it provides “advice and support to members to assist them manage the full range of health and well-being issues that arise in the workforce,” adding that “a lot of employers also have additional employee assistance programmes in place to support staff. “

Medical Director of the Dublin Well Woman Clinic, Dr Shirley McQuade sees many women who are in the workplace and struggling with the fallout of severe menopausal symptoms.  “A lot of the women I see are in their late forties into their fifties generally and in quite responsible positions at work,” she explains.

“They may be in management, overseeing a team of people. They find their anxiety levels at work would be affected – partly because they have been awake half the night.”  They may experience a low mood, feel constantly tired or not as “sharp or as at the top of their game as they were as regards word-finding,” she says, adding that some patients reported that they were “not able to take the stuff out of the air like they used to.”

“They get very frustrated, but they find ways around it,” she adds, saying that this usually just requires extra preparation and more detailed notes. However, the physical effects must also be dealt with:  “A lot of offices are air-conditioned, so you cannot open a window. If you’re sitting around a table with colleagues and a hot flush starts it can be uncomfortable,” she says, adding that other people may not even notice.  However, sometimes they do – and their response is not always sympathetic.

Menopausal symptoms kicked in for Limerick woman Alice Culbert when she was in her early fifties and holding a management position in a large company.  “I started getting very bad night sweats, as well as massive anxiety attacks. I also got hot flushes during the day which I called my ‘tropical moments,’” she quipped.

But it wasn’t much fun:  “I found it particularly hard because I was a mature lady working amongst a lot of 20 and 30 year-olds.  “At one stage I went through a terrible week of hot flushes – I had water running down my face and my whole body covered in sweat.”  To relieve the discomfort, Culbert recalls, she stood up and walked around fanning herself with a page of paper.  She was called aside by a superior who quietly informed her that “walking around fanning myself was not appropriate.”  Combined with other health problems, the menopausal symptoms made it increasingly ‘hard to work,’ she recalls, and eventually she withdrew from the workforce.  “I find that your self-confidence is affected. I found it very difficult to manage and in the end I gave up working.”

“Generally I found male colleagues and young female colleagues to be very insensitive – it was as if you were an embarrassment,” she recalls, adding that in her experience, the menopause was virtually a taboo subject in the workplace. “It’s like the Big Secret. I got very annoyed about the attitude to menopause in the workplace. I think a working woman with menopause is a champion!  If a woman can manage menopause while working at a demanding job she is an absolute heroine.”

McQuade says many women are reluctant to make much of their often debilitating symptoms in the workplace:  “Women tend not to make a big deal of it, amongst colleagues and certainly not in a mixed work environment.”

“Women say they don’t want to talk to their colleagues about it,” she adds. And yes, McQuade, acknowledges, menopause is a milestone in life – but it’s one that women want to get “fixed so that they can continue on with their job.”

“More than one person has come in to me and said they want their mind back! These are people in high pressure jobs who need to be on the ball,” she observes. You can make life a little easier by wearing layers of thin clothes, which you can peel off if you experience a hot flush, she says. Cut back on the caffeine, which can make some of the symptoms worse.  Losing weight and exercising can also help alleviate symptoms, she believes.

Menopause is a difficult phase in any women’s life, agrees Dr Nicolette Kroon, gynaecologist at the Blackrock Clinic and St Vincent’s Private Hospital.  “It’s often more difficult for women in the workplace trying to work when they are not feeling 100%,” she says, adding that symptoms like hot flushes, night  sweats, poor sleep, low mood, poor concentration, fatigue and loss of energy  are all part of the woman’s transition to a lower oestrogen status.

For some the problem could be simply coping with the fatigue caused by poor sleep, or flushing during meetings, or even just needing to have a window open.  However, she says, most professional women will persevere with their career regardless. “It’s about the frustration caused by the symptoms; the frustration of not sleeping, or feeling under par,” she says, adding however that she would cautious about generalising, as there are so many different facets to menopause.  “There is a high variation in how people show their symptoms,” she explains.

It’s worth recalling the comments of Professor Mary Ann Lumsden of the International Menopause Society, who has said the implications of the symptoms of menopause – which can go on for several years – are potentially comparable to those of pregnancy.

Now 48, businesswoman Sylvia Doyle started to experience menopausal symptoms such as night sweats and hot flushes when she was in her early forties. “The night sweats were the worst, and I was getting them nearly every night. At the time I was running a busy B&B, which was very successful and I was going seven days a week.”

“I think the symptoms played a part in my decision to give it up eventually,” she says, adding that for her, one of the more significant issues was a fall in self-confidence. “I would not be as confident since it started. I also find I am very self-conscious of the hot flushes if I am under pressure – you cannot control the sweats or the hot flushes, you can end up getting so worried about them that you could nearly bring them on yourself.”

“I had a lot of face-to-face dealings with people, and I’d know I was getting red,” she says, adding that her sleep has also been affected. “I gave up the B&B shortly after the symptoms started, around 2008 and I started working instead from an office in my house doing credit control for my husband’s company. I am on my own, I work to my own pace and it’s just phone calls. So, if I have a hot flush nobody can see!”

Given that menopause will hit all women at some stage, it’s surprising that a more proactive approach is not taken. As businesswomen, we need to share our experiences; and as leaders we need to ensure that the path for others is not a lonely one!

Do you know what it feels like to stand with...