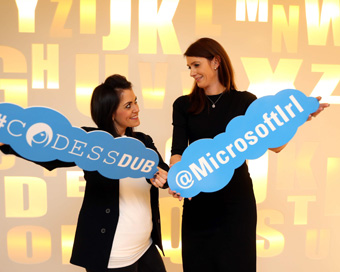 Fiona Carney’s career path has been straightforward; from corporate consulting into the multinational technology sector with Microsoft. But it has always been informed by two things; the example of her academic mother, and her passion for contributing something meaningful.

She recently spoke at Codess, a community aimed at promoting networking and career building among women in the technology sector and developed by Microsoft’s Alexa Glick, who arrived at the company via its acquisition of Skype.

The Dublin event was organised by her colleagues Ellen O’Neill and Deirdre Culbert, both of whom work in the technical side of Microsoft in Dublin,and heard from women in the industry about their own experiences as well as covering career coaching and gender in technology.

As a qualified career coach, Carney’s perspective on how to manage a career is interesting. Moving horizontally within a company can be as useful as a promotion, she says – she worked in operations for many years before moving into sales. However, she points out that with the fast moving nature of the tech industry, a title may remain the same while a role changes utterly over time.

“The most important thing for somebody is that they’re learning new skills, they’re feeling stretched, and that they’re getting new experiences.” She says people need to be open minded; be clear on their goals; communicate with others what these goals are; and to always ask for help.

As a graduate of Commerce in UCD, Carney joined KPMG Consulting as a process strategy consultant, moving from there into Accenture where she worked on change management strategy.

During her time at Accenture, she spent eight months helping to develop a non-profit in Mexico. She and a French colleague devised a business plan for an organisation helping women to set up their own small businesses. She continues to value voluntary work, most recently mentoring small businesses with PLATO, while promoting and mentoring women is also a passion.

“I think it’s very important to be able to contribute and to share what I’ve learned in corporates with people who are getting started. There’s a lot we take for granted in big companies, with our resources and the way we can do things.”

In her day job at Microsoft, she has just taken on a new role as – a bit of a mouthful – ‘Director for Business Managements Dynamics Timezone EMEA’. In simple terms, she’s a sales process manager throughout European, Middle East and African markets, with a team working in different timezones throughout the area. It involves a lot of travel, but, she says, it’s workable if you are prepared to be flexible.

And Microsoft is a flexible company to work in, she says, with a practical approach to working from home and hours worked, due largely to its international complexity, with different people even within one team having to communicate with Asia in the morning or the US at night.

As well as this, the company is committed to gender diversity; something notably lacking in many technology companies.

In addition to her ‘day job’, Carney also acts as Gender Diversity Lead for the Dublin site, along with up to 40 women and men, who voluntarily organise events – such as Codess – and promote mentoring and coaching of women executives within the company.

According to its last gender diversity report, 29% of Microsoft employees are women. In some management teams at the Dublin site, Fiona points out that there is a 50/50 gender breakdown; in others, the figures aren’t so promising. In common with the rest of the IT industry, attracting women to non-technical roles is not so challenging, but attracting and then retaining them in the technical side of the business is difficult, hence the recent Codess event, aimed at just that.

To find out more about Codess events worldwide, see codess.net.

Melissa Curry: Made From The...

With a CV that ranges from Paris boutiques...