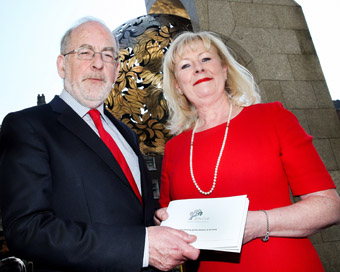 The Governor of the Central Bank of Ireland, Patrick Honohan, today became the 100th supporter of the 30% Club Ireland, a movement which aims to reach a 30% female gender balance in Irish business boards and executive management level by 2020.

Business leaders from 100 of Ireland’s leading companies and organisations across a diverse range of sectors including Arthur Cox, BNY Mellon, CPL, ESB, IBEC, Intel, Facebook, Northern Trust, Paypal, Smurfit Kappa and Vodafone have become supporters of the 30% Club since it launched in Ireland in May 2014.

The 30% Club is a global movement of international chairmen and CEOs who are committed to better gender balance at all levels of their organisations through voluntary actions.  The Irish chapter of the 30% Club was established with the support of founding Chairmen Nicky Hartery, CRH; Vivienne Jupp, CIE; Michael Buckley, KKR Alternative Investments & KKR Credit Advisers and formerly DCC; Lochlann Quinn, formerly AIB and ESB, Kieran McGowan, Business in the Community and Gary Kennedy, Greencore.

(Pictured at the announcement was Governor of the Central Bank of Ireland, Patrick Honohan and Marie O’Connor, leader of 30% Club Ireland and partner at PwC. PIC: NO FEE, MAXWELLS)

On Wednesday, April 8th at the DoubleTree by...