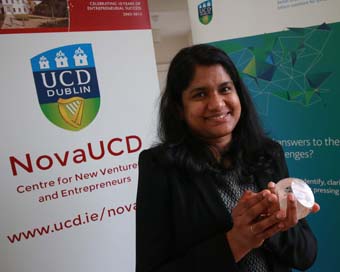 An early-stage business idea to commercialise a new patented process of producing Hydroxytyrosol, an effective antioxidant, for use in the food and cosmetics industries, has been declared winner of the 2015 UCD Life Science Innovation Sprint Programme.

The new process can produce this antioxidant more efficiently and more economically than the current process and in a form purer than occurs naturally.

The winning business idea which has emerged from the 2015 UCD Life Science Innovation Sprint Programme is based on commercialising a new patented process of synthesising Hydroxytyrosol significantly cheaper than the currently available method and significantly purer than the natural extract.

The promoter of this early-stage business idea is Dr Reeta Davis who is based at the UCD Earth Institute. Dr Davis is a post-doctoral scientist working under the supervision of Professor Kevin O’Connor in the UCD School of Biomolecular and Biomedical Science and UCD Earth Institute.

The UCD Life Science Innovation Sprint Programme is a 1-day initiative designed and delivered by UCD’s technology transfer and enterprise development teams at NovaUCD in collaboration with the UCD Earth Institute. It aims to encourage the development of commercial outputs arising from UCD Life Science research by engaging with UCD researchers at an earlier stage in the commercialisation process.

On Wednesday, April 8th at the DoubleTree by...

Employers Spot Lies In Over...

Whether it’s an exaggerated job title,...