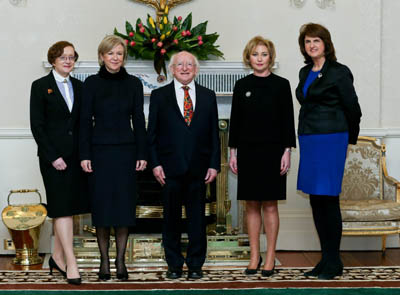 President Michael D. Higgins appointed Judge Margaret Heneghan and Ms Isobel Kennedy S as judges of the High Court on February 10th at a ceremony in Áras An Uachtaráin.

Hon. Judge Margaret Heneghan, succeeded Judge Daniel Herbert, who retired in November. She was first called to the bar in 1993 and was a member of the Legal Aid Board January 2009 to January 2010. She was appointed as a Judge of the Circuit Court in January 2010 and assigned to the Dublin Circuit in April 2011.

Isobel Kennedy SC was nominated by the government for the position after a vacancy was created. She was called to the Bar in 1988 and  primarily practised in Criminal Law, Judicial Review and Constitutional Law. She has been a member of the Barristers’ Professional Conduct Tribunal for five years.

Miriam Forde has recently been appointed as...