Shining A Light On Irish Women in Research 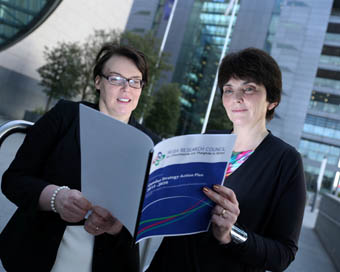 For International Women’s Day 2015, the Irish Research Council is highlighting Irish female researchers and their work in diverse areas, ranging from sexual violence and disability to Alzheimer’s disease.

Dr Eucharia Meehan, Director of the Irish Research Council, commented that: “women account for almost half (49.4%) of total postgraduate research enrolments in 2013/14”.

In the last six years, there has been a 7.4% increase in the numbers of females studying for full-time PhDs, and 53% of Scholars funded by the Council are female. Nationally, with growing numbers of students entering higher education and progressing to higher degrees, a significant opportunity exists for us to harness all available talent and expertise.

“The Council has developed a Gender Strategy and Action Plan and engages with a host of international funding agencies in order to develop appropriate policies and initiatives”.

She adds: “A key feature in this Strategy is to promote the research of female researchers. To mark International Women’s Day 2015, the theme of which is ‘Make it Happen’, we wish to shine a light on some of our outstanding female researchers and their work, which exemplify creativity and innovation in Irish research.”

‘Unmasking Prejudice against Women with Disabilities’

“Ever since the first International Women’s Day in 1911, Irish women have resisted laws that are based on bigoted ideologies and stereotypes,” commented Priscilla Fay, IRC Scholar, “However, prosecution rates and underreporting of sexual violence against women, in particular women with cognitive disabilities, continues to be problematic. There is no consensus on the appropriate response to this issue within academic literature or within state policies.”

As she explains: “This research can be used to inform policymakers, user-led disability organisations, rape crisis networks, and victim groups as to whether we should ‘Make It Happen’ or not.”

‘Putting the Brakes on Alzheimer’s Disease’

Dr Sinéad Ryan, IRC Fellow at Trinity College Dublin, said: “Alzheimer’s disease (AD) is one of the leading causes of dementia and currently there is no effective cure for the disease. Age is one of the greatest risk factors for developing AD and, with an increasing ‘greying’ of the human population, there is an impetus in the research community to learn more about the causes of the condition and to develop novel therapeutics to delay the onset of the disease and ultimately develop a cure for this debilitating neurodegenerative disorder.”

In recent years, there has been a growing interest in the benefits of exercise, not only for a healthy brain, but also in cases of neurological disease (e.g. stroke), neurodegenerative disease (e.g. AD) and psychiatric conditions (e.g. depression). Dr Ryan’s research is assessing the potential benefits of exercise on cognitive function in a mouse strain that exhibits several features of AD.

Dr Ryan says: “Drugs for AD are often only administered when pathology is at quite an advanced stage, a fact which likely reduces the efficacy of treatments in aggressively tackling the disease. My research is investigating the effect of starting an exercise training programme in mice before symptoms appear. I am hoping to demonstrate the value of exercise as an early intervention to delay the onset of AD symptoms or slow down progression of the disease.”

For more information on the IRC and their Gender Strategy and Action Plan 2013-2020, visit www.research.ie.

With less than two weeks to go until the...