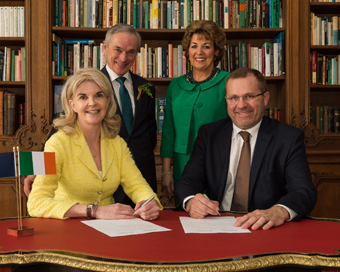 InVivo, the largest agricultural co-operative group in France, has formally signed an agreement to acquire a 50% stake in Life Scientific, an Irish R&D company which specialises in off-patent crop protection products.

The formal signing ceremony, coordinated by Enterprise Ireland, took place at an event organised by the Irish Embassy in Paris earlier this week to mark St. Patrick’s Day, and was attended by Richard Bruton TD, Minister for Jobs, Enterprise and Innovation and Ambassador Geraldine Byrne Nason.

As a result of this new partnership Life Scientific plans to create 20 new, predominantly research and development jobs, over the next five years, at its headquarters at NovaUCD, the Centre for New Ventures and Entrepreneurs at University College Dublin (UCD). The company, with an annual turnover of over €10 million, currently employs 20 people at NovaUCD who are predominantly scientists and educated to PhD level.

Nicola Mitchell, the CEO who established Life Scientific in 1995, said:  “This agreement concluded with InVivo will allow Life Scientific to scale our proven business model, both in France and globally. It will strengthen our engagement with our customers, the InVivo cooperative members, and is a major endorsement of Life Scientific’s continued capacity to innovate on a global scale.”

InterTradeIreland is organising a series of...