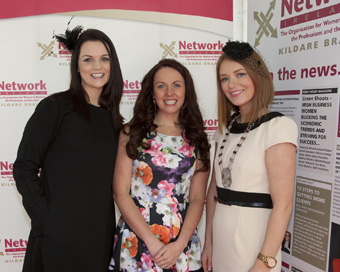 This year many events were held around Ireland to honour International Women’s Day, which celebrated the theme of ‘Make It Happen’ this year. We asked for your photos and here is a fantastic selection of them:

Alison Bough, President of Network Ireland Kildare Branch, said: “Network Ireland Kildare branch are strong believers in empowering women and what better to do this than to show support to a fellow member, Edel Mc Cabe, and our local track. We have had a fantastic day here today and a few winners!”.  The members gathered at Naas Racecourse, on Sunday 8th March and welcomed Mary Kennedy, RTÉ, as their special guest.

Women in Finance ‘Inspire, Be Inspired’

On March 5th, The Insurance Institute of Ireland (III) and The Institute of Banking (IOB) hosted the third event in the ‘Inspire, Be Inspired’ initiative – a networking and mentoring platform for women working in financial services. It was held in Dublin’s Marker Hotel.

On March 6th, Network Ireland hosted their IWD celebrations in Trinity College, Dublin where the theme ‘Harnessing Opportunity in Changing Times’ was the focus. The event included speakers such as Independent MEP Marian Harkin; philanthropist Danielle Ryan; Dr. Micheline Sheehy-Skeffington, who recently won a landmark case on the grounds of gender discrimination against NUI Galway; and Niamh Bushell, Dublin’s first-ever commissioner for start-ups. Morning Edition’s Keelin Shanley was the MC for the day.

Citi’s IWD event tied in with their 50th anniversary in Ireland so they invited five women who represent the ‘Women through the Decades’ (past and present Citi employees) and they released 50 balloons in to the skies of Dublin. The event was held at Citi’s office in Dublin on March 10th and Aisling Hassell, Global Head of Customer Experience at AirBnB, was the keynote speaker.

Finalists from the Small Firms Association...