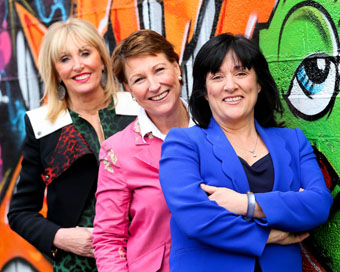 With less than two weeks to go until the deadline for nominations, the 2015 EY Entrepreneur Of The Year awards programme is asking Ireland’s female entrepreneurs to participate.

Now in its 18th year, EY Entrepreneur Of The Year (EOY) has evolved into a development programme for the best entrepreneurs across the island of Ireland.  Open to high-performing entrepreneurs from every sector, the programme accepts submissions from entrepreneurs of different growth stages as well as nominations from the general public.

As part of the programme, this year’s 24 finalists will join a group of 100 entrepreneurs, all previous finalists and winners of EY Entrepreneur Of The Year, for a week-long CEO Retreat taking place between Berlin and Munich.  The intensive week will include executive education as well as master classes with the CEOs at the helm of Germany’s most successful start-ups and globally renowned indigenous companies.

As a former EOY winner, Anne Heraty, the newly appointed Chairperson of the EY Entrepreneur Of The Year judging panel and CEO of Cpl Resources, urged female entrepreneurs to get involved: “Having a supportive network of like-minded peers is crucial to the success of every entrepreneur and being part of the Entrepreneur Of The Year community has enabled me to shorten the learning curve, create valuable business partnerships and receive counsel on tough business problems.”

The awards programme is divided into three categories – Emerging, Industry and International – with 8 finalists chosen in each category. The 24 finalists will be selected by the independent panel of judges made up of former EOY winners.  The overall winner of EY Entrepreneur Of The Year 2015 will go on to compete against the world’s leading entrepreneurs at World Entrepreneur Of The Year in Monte Carlo in June 2016.

Apply online at www.eoy.ie or call the EY Entrepreneur Of The Year team for further information on 01 221 2250. The deadline for nominations is March 20th 2015.

Shining A Light On Irish...

The European Commission is launching the...