Posted In: Women Who Launch 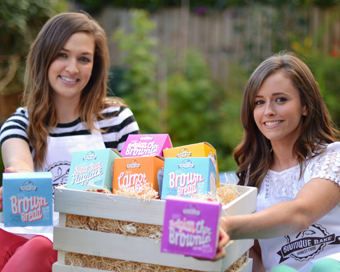 Many of us like to think that we could take on Darina Allen in the kitchen. Social media sites like Instagram where we share snaps of our homemade dinners and TV shows like The Great Irish Bake Off, spur on our inner master chef. Realistically the majority of us aren’t going to be giving up the day job to launch our culinary delights onto the world. That is unless you are Catherine Buggy or Suzanne Lynch.

Two friends who have known each other since they were 12 years old have just signed a deal with retail giant Tesco that will see their gourmet baking mixes stocked in 11 stores in Dublin and Wicklow. It is the mere beginning of what will hopefully be many business coups for these young 20-somethings.

Boutique Bake was founded in June 2013. Catherine left her job in HR while Suzanne had graduated from Ballymaloe Cookery School. Suzanne reveals that her initial interest in food came from an illness: “I was studying Auctioneering in college and in my final year I had a minor health scare. It made me realise that I wanted to work with food and so I did a three month course with Darina Allen in Cork.”

The girls soon realised their combined passion for baking and interest in good clean food was a business avenue worth exploring. Catherine admits: “When we started getting serious about wanting to do something in food, we initially didn’t think there was anything new that could be done. But when we delved further we saw there was a gap for high quality clean ingredients in the baking section.”

With some brainstorming, and recipe testing on willing family members, the girls ventured into farmer’s markets. “They’re really good for acting as a testing ground. At the end of the day the consumer is a creature of habit and after our first week we were having return customers.” Similarly, these days the girls are spending much of their week doing in-store demos.

Since that very first day of extreme nerves setting up their stall at the market the girls have seen their confidence grow by leaps and bounds. “We did the Farmers market for three months and then we started approaching Gourmet shops like Mortons of Ranelagh. Then a few months later we were sitting down with the large retailers!”

Spotting a gap in the market for baking mixes without artificial flavours, additives or preservatives, the pair started developing cake and bread mixes. You can fake it until you make it with one of their collection: ‘The Zingy One’ (lemon drizzle cake mix), ‘The Rustic One’ (seeded brown bread mix), ‘The Cheeky One’, (carrot cake mix), ‘The Gooey One’, (Belgian chocolate brownie mix) or ‘The Chewy One’ (super seed flapjack mix).

The duo participated in the Tesco Bord Bia Supplier Development Programme in 2014. It was a fantastic eye opening experience that gave insight into the cogs behind the retail machine, they say: “It brings you behind the scenes where you see what happens to your product the moment it comes in on the trunk. We learnt how one wrong barcode can impact your product. When you’re wheeling your trolley around the supermarket you really don’t have any idea of what happens behind the aisles.”

Move over Betty Crocker, Boutique Bake is young, clean, quality driven, personal and, most importantly, Irish. From a kitchen table in Donnybrook, Dublin to a production space in Ashbourne, Meath the girls are set to boost product volumes over the coming years. “The biggest challenge to date was finding a suitable manufacturer,” says Catherine. “When we started to move out of the kitchen we needed someone to take a chance on us. Someone that wanted to grow with us.”

Like a cake ready to rise, success is all in the (baking) mix for this partnership. But what do they hope the horizon holds? Both Suzanne and Catherine eagerly divulge: “We’re going to launch a YouTube channel in the near future. Something fun that shows you don’t necessarily have to do exactly what’s on the pack. We’re definitely looking for Boutique Bake to have a national reach. And in five years time we hope to be exporting, which we’re investigating this year. Then a book will come further down the line.”

A busy time ahead, these young entrepreneurs are set.

YOUR WISHES IF YOU HAD A BLANK CHEQUE?

– More staff. We’re big on events so we’d like to grow the business through doing every event under the sun!

– Down the line we’re hoping to export so we’d book a few first class tickets around the world.

– Invest in a state of the art office with two big cars and maybe even a nice holiday since we’ve been working all the time!

Women Who Launch: Next

Every month we speak to women entrepreneurs...