The Ramblings of a Working Mum 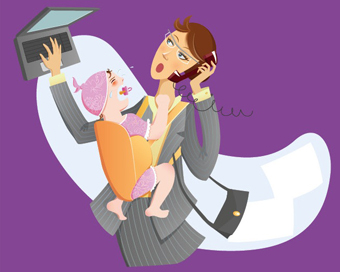 I think my daughter is becoming a young woman. I know, she has only turned double-digits but as she says herself: “Look mum, my macaroons are getting bigger.” For those of you not versed in ‘Bexeneze’, we are talking about her small, almost invisible boobs! What is it with kids, they seem to want to grow up so fast whereas we, as adults, pray to retain our youth-like qualities for eternity?

Bex is a real show piece. She is a free spirit with few inhibitions – and that includes showing off, at will, what she really hasn’t got. Her obsession peaked recently when I found myself in the kids underwear section of a leading department store trawling through the bras in the hope that there would be one small enough to satisfy an over-zealous young lady.

Buying a daughter’s first bra is a major event. It’s a proud and sensitive occasion, which cements the mother-daughter bond or so you would think! Our first obstacle in our impromptu excursion, was measuring up. We all know how important it is to get the right size as an ill-fitting bra can have dire consequences! But it’s hard to measure up what, in reality, isn’t there. I was amazed though at the range of choice available – from training to light support with or without pads to full support with plastic boning and then of course the crop top styles.

After much deliberation, my enthusiastic shopper eventually chose a bra which was more aesthetically pleasing than practical and threw in a couple of rather expensive knickers to boot. The sale was made and I walked away with a knowing smile – Yes, we had bought her first bra, pretty and perfectly formed and who knows, one day it just might fit her – but not today!

You know how frustrating it is when after a...