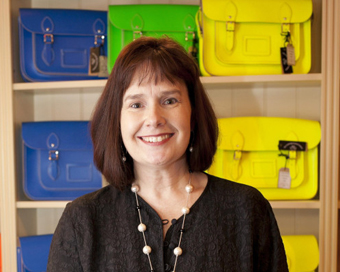 A definitive list of Britain’s most successful business leaders actively supporting the next generation of entrepreneurs has been announced by Maserati and the Centre for Entrepreneurs (CFE).

Essential to the positive development of UK entrepreneurialism, the proportion of small-medium enterprises run mainly by women has increased from 14% in 2008 to 20% in 2015, demonstrating an encouraging trend for the growing number of female business leaders.

·         Julie Deane (pictured) – is the force behind the vastly successful Cambridge Satchel Company, which recently secured $21m investment from Index Ventures. Julie is committed to preserving British manufacturing – a luxury rarely afforded by start-up businesses. She has used the company’s success to drive a re-skilling of the British population from its Leicestershire-based factory; taking on apprentices, engaging disillusioned youth and encouraging people to embrace craftsmanship.

·         Cynthia Shanmugalingam – is the founder of the UK’s first food startup incubator – Kitchenette, a London-based setup providing talented food entrepreneurs with London’s top mentors, pop-up residencies and access to investors to give their delicious and original new restaurants the best possible start.

·         Ann Gloag – is co-founder of international transport group Stagecoach, and also runs her own charitable foundation, the Gloag Foundation. Through her involvement with Entrepreneurial Scotland and Entrepreneurial Spark, Ann mentors and helps young entrepreneurs. She is dedicated to creating and maintaining a thriving entrepreneurial community in Scotland.

·         Carrie Green – is the founder of the Female Entrepreneur Association, a global network that seeks to inspire women around the world to turn their ideas into reality and build successful businesses they love. Carrie is also a mentor for the Prince’s Trust and a winner of The Change Makers Award, which recognized her as an under 30 ‘rising star’.

The search for the prestigious Maserati 100 was launched at the end of last year as part of the Italian car brand’s centennial year celebrations. In partnership with the Centre for Entrepreneurs, members of the business community were invited to nominate the individuals who they felt should be recognised for their support of the next generation of entrepreneurs.

Critiqued by an expert panel from the Centre for Entrepreneurs to reach the final one hundred names, the full Maserati 100 list can be found here: www.themaserati100.co.uk

Ann Summers has revealed its store on...