It’s in the Stars! 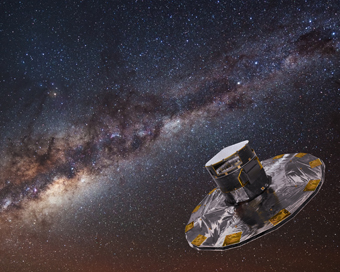 Many of us gaze in wonderment at a star-filled sky but not many of us get an opportunity to ‘count our lucky stars’! Two ladies who are taking star-gazing to a whole new level are astrophysicists Professor Lorraine Hanlon and Dr. Sheila McBreen founders of Irish company Parameter Space Limited.

For the uninitiated, the science goals of Astrophysics are breathtaking. NASA’s goal in Astrophysics, for example, is to ‘Discover how the universe works, explore how it began and evolved, and search for life on planets around the stars’. But back to planet earth…

Parameter Space Limited, headed by Lorraine and Sheila, is a spin-out from the UCD School of Physics. They established the company following completion of the 5-week 2014 UCD Commercialisation Bootcamp held at NovaUCD. The good news is that the company has recently secured a €800,000 contract from the European Space Agency (ESA) to fund a 3-year project.

Parameter Space will develop a portal to host analysis algorithms provided by the scientific community and develop specific tools for enhanced analysis and access to this data.

The new software developed will be capable of exploiting the unprecedented volume of data returning to Earth from ESA’s Gaia satellite, which was launched in late 2013. To put this into context, the main goals of this €700 million mission are to measure the precise positions and luminosity of 1 billion stars and to discover thousands of planets around other stars and supernovae.

Since July 2014 Gaia has made nearly 100 billion measurements with its 1-billion pixel digital camera. Gaia’s database will eventually grow to 1 Petabyte in size, which is equivalent to about 200,000 DVDs worth of data. Analysis of this data will result in the creation of a three-dimensional map of the Milky Way galaxy!

Professor Hanlon and Dr. McBreen lead the UCD Space Science and Advanced Materials group and together have over 30 years of experience working on space missions, including ESA’s INTEGRAL mission and NASA’s Fermi Gamma-ray Space Telescope.

Professor Lorraine Hanlon said, “We are delighted to have secured this key contract from ESA and our aim is to develop software tools that will provide additional capability for scientists and citizens to make use of this unique data set.”

Dr Sheila McBreen added, “The data analytics skills we have developed over many years working on fundamental physics in the UCD Space Science group have enabled us to make a successful bid for this ESA contract.”

The contract will also allow the company to create 4 new jobs.

How B2B Businesses Are...