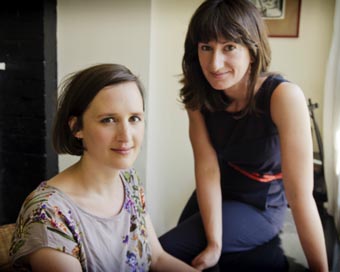 The 2015 David Manley Awards ceremony was held yesterday in the offices of Mason Hayes & Curran, one of the Awards’ sponsors, in Dublin city. Running since 2002, the awards were the first entrepreneur awards in Ireland to offer mentoring from a panel of experts as part of the overall prize to the winner – all nine finalists also receive mentoring.

Among the winners were Sarah Davis-Goff and Lisa Coen, Tramp Press, who won the David Manley Emerging Arts Entrepreneur Award. Sarah and Lisa (pictured) launched Tramp Press in early 2014 as an independent publisher which aimed to introduce readers to great new writing that other publishers would shy away from. Their formula is to publish less and publish better in Ireland and beyond.

As the overall winner, Pat Divilly wins €10,000 in cash and over €100,000 worth of mentoring and consultancy services, which are supplied by experts in finance, law, accountancy, management consultancy, social media, marketing, payroll and accounts software, corporate and brand identity and public relations.