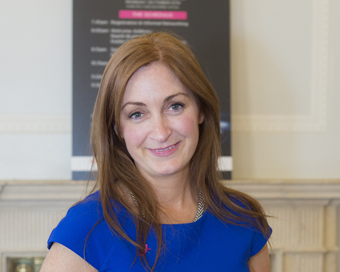 Leonora O’Brien’s ambition is to reduce the amount of unnecessary deaths caused by incorrectly prescribed medication and she’s achieving it, which is no mean feat.

In a nutshell, Pharmapod is a cloud-based software, which detects medication-related errors and incidents (such as incorrect medication given, overdoses, serious side effects etc.) within pharmacies and hospitals. The beauty of Pharmapod is that the system then shares this vital data across borders on a national and international level, which creates a safer environment for the pharmaceutical industry in terms of dosages and medicinal administration in turn making it safer for patients.

The Pharmapod founder and CEO has channelled her years of experience in the various sectors of the pharmacy industry to create this innovative solution. In theory it sounds so simple that it’s a wonder no one has tried it before, yet “Pharmapod is the first international platform of its kind to pool information from country to country”.

Leonora’s journey to Pharmapod has been an impressive one. She studied pharmacy and moved to London to do her pre-registration, which is an internship of sorts. There she worked in community pharmacy in a patient-facing role for ten years before moving up the management ladder, and eventually becoming chief pharmacist in Lloyd’s Pharmacy Group (then Unicare) in Ireland. “That was quite a weighty role being accountable for errors that would have occurred in practice.” She progressed to being a European manager for a pharmacy group, which saw her based in Germany, “I got to work across eight countries and that gave me a real insight into European pharmacy”.

Leonora returned to Ireland to work for the pharmacy regulator and again it was a totally different role, coming away from a commercial background into the legislation and regulatory side of pharmacy practice. Her role was about raising awareness of the new pharmacy regulation laws and how they impact the profession. “I’d help with communication to the superintendents. It was always about helping the pharmacists improve their standards of practice.”

After two years working there, she put all her knowledge and experience into the Pharmapod system. She realised when she was working in Europe that pharmacists had the same challenges everywhere, and that when a medication error happens other professionals don’t find out about it. “There was no data sharing mechanism and I thought it was such as wasted opportunity really. We need to be sharing our information and pooling our experiences in order to develop as a profession.”

Fully confident in her idea and its global appeal, Leonora presented it to the NDRC Launchpad programme, “probably the best digital accelerator programme here”, in 2012. It’s an extremely competitive process and there were 170 companies at the time pitching for 15 spots. “They help anyone who wants to create a digital company and they’ll have a good concept and domain knowledge. They’ll help them to validate their thinking around the product; help validation in the marketplace and help you build the product as well.” She was accepted and received much needed guidance as she is not from a tech background herself. “That was a three month intensive programme and we had customers by the end of it but we needed to get investment. We embarked on the whole investment journey and we raised a seed round of €750,000 in August of this year.”

For Leonora, 2014 has been “primarily about building the team to gear up for international roll-out. We secured an agreement with the National Pharmacy Association in the UK that we roll out to all their members. We finished the pilot and it will be available to pharmacists from the end of this year and onwards. Then we’re looking to the States”. Her team now comprises ten staff members, including pharmacists, “which was always the strategy, to be different to other players in the market, which were always just IT”. Diversity is key to her leadership and management style and “when doing interviews I try to pick people who think differently to myself because I think that’s really important and healthy for an organisation”.

The Roscommon native credits her father’s entrepreneurial spirit as her inspiration and “my mother’s family are all very traditional West of Ireland people where you just have to make your own business – there are no corporations around”. Her uncle ran Sasha, the women’s clothing chain, until he retired from it – her family were never risk-averse, in fact they were quite gung-ho. “They really instilled that in us: ‘whatever you want to do, just give it a shot’. I think it’s a very healthy approach to have and failure is alright as well. The worst thing you can do is not to try.”

However Leonora feels that her business education in secondary school was lacking and it needed to be more inspiring. “We didn’t have access to entrepreneurs as such or even as a term, we wouldn’t have been aware of it. In our course it was like business was a big pile of ledgers – that was the level of excitement around it. I wasn’t interested in that as a subject at all.” Instead she focused on science and English literature – she later studied a Masters in journalism – where she really explored her passions.

She believes education has improved greatly now and she herself speaks at schools on entrepreneurship and science, technology, engineering and medicine (STEM). “Recently I was in Loreto on the Green where they have a mentorship programme. The fourth and fifth year students mentor the first years, which is lovely to see and they’re getting used to that ‘giving back’ mentality; sharing their experiences and learnings with younger people.”

Another aim of hers is to launch an ‘Entrepreneur Bus’ next year, which will see a bus visiting schools with entrepreneurs on board to give talks to the pupils. “You’re starting to instil an entrepreneurial mind set at as young an age as possible. When people come out of school they’ll hit the ground running and they won’t have to learn it in the ad hoc way that I did.” The inspiration came about as she was being invited to speak at many schools and she did so despite her hectic schedule: “I thought I should get other entrepreneurs to help out and visit schools in their areas”. Niamh Bushnell, the Dublin Commissioner for Start-ups, has given the project her seal of approval and will be collaborating with Leonora on it.

Leonora is a particularly passionate ambassador for women working in STEM and speaks at many events both nationally and internationally. She attends so many because she believes exposure is the key to inspiring young women to pursue the field: “Being out there as a role model is really important because we do need to showcase examples. I’d love to see more women in the engineering space. There are things like CoderDojo where if I had a daughter I would send her there.”

Her tireless work hasn’t gone unrecognised either: she was given the title of ‘Laureate for Europe’ at the global Cartier Women’s Initiative Awards in October 2013 and of course won the WMB Woman In Technology Award 2014.

When she’s not winning awards or inspiring crowds, she’s focusing on expansion, “to give an idea of the scale of the problem, 198,000 deaths are caused each year in the EU alone by avoidable side effects of medicines; they are the fifth most common cause of hospital death and cost the EU €79 billion annually.” Her vision for Pharmapod is to become the risk management agent to drive patient safety globally and reduce medication error. And judging by the pace she’s moving at, global domination isn’t too far away.

This article was originally published in the Winter 2014 issue of WMB Magazine. If you would like to nominate someone or yourself for the WMB Woman in Technology Award 2015, click here>>

Anne Heraty is one of Ireland’s best...