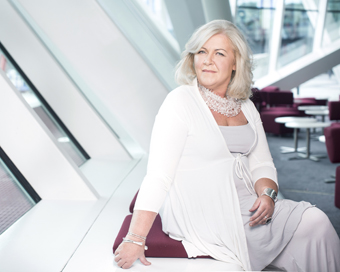 The 2014 Newstalk WMB Female Social Entrepreneur Award recipient is Debbie Deegan, the big heart behind children’s charity To Russia With Love. The Dubliner’s journey started in 1998 when she began the process of adopting a little girl from a rundown western Russia orphanage.

Although Debbie and her husband were not qualified to adopt that didn’t stop them from keeping seven year- old Zina without the necessary paperwork. It was a four-year process the stay-at-home mum didn’t have time to undergo. “The Irish authorities weren’t supportive, they told me to send her back and come back for her when I had passed my assessment. So I completely ignored the Irish side and kept her. Once I knew that the Russians didn’t come looking for her, I knew we could keep her safely,” recounts Debbie.

“Zina had no family in the world and she’d never had a visitor in seven years so I felt no matter what happened in her life, coming to us had to be better than what she had.” That was 1997 and a year later when Zina was speaking English she started telling stories about the children she had left behind.

A year later Debbie went back to find those children, who she felt should remain in Zina’s life. “I got on a plane and went to Russia to look for this orphanage and I’m still there 17 years later. I can’t get out of the place!” she laughs. “I didn’t realise it was going to be a lifetime commitment but I made a promise to the children when I got there.

People said she was never going to be able to do it but this formidable Irish mammy was determined. Aware of the enormous battle ahead, when Debbie arrived home she made a plea to the people of Ireland on national television. “I had never been on television in my life and I never wanted to be,” she adds laughing. “But I was in the position where I had to ask Ireland for help.” Miraculously the next day the help started to snowball.

The saying goes ‘Don’t sweat the small stuff’ and so the unflappable Debbie began exactly there. “It was all small stuff, millions of small things, but I had a team around me that I felt had big hearts, not big wallets, and that way we could go after wallets. So I surrounded myself with people like that.”

With a plan in place, albeit an elaborate ‘to-do’ list, Debbie and her team took on an orphanage of 200 children in minus 30 degree Russia. “In snow boots with snow up to our hips we tried to make them feel warm and loved, kissed and hugged. Some of the children had never been hugged before. Russians aren’t inclined to do that anyway and carers aren’t inclined to do it because they always maintain a bit of a distance but the Irish are huggers and kissers!”

And so To Russia With Love was born – It was aptly named as they had nothing else to give but love. Yet it wasn’t long before the team began to get serious with their aims. Debbie credits one particular person for this: “I took on a brilliant man that ran the prison system in Ireland. I knew I wanted 200 children with no head lice, I knew I needed 200 fresh beds every day but I didn’t know how to achieve that. He taught me how to make systems.”

Lists upon lists were built. “We started doing educational, medical, and sports programmes, we just grew. As the Celtic Tiger grew the money grew in our bank account, which allowed me to do more stuff.” Unfortunately when the Celtic Tiger started to meow instead of roar, donations turned to pennies instead of euros. “This is why awards like the WMB Newstalk Social Entrepreneur Award make a difference now. In terms of publicity it’s fantastic,” says Debbie.

At the height of the funding To Russia With Love was spending €800,000 a year on children’s programmes. Today there are seven programmes on offer for the children. One example is the young Mother and Baby programme, which aims to not only teach the fundamentals, but also to break the cycle of orphaned girls putting their children into orphanages. They are provided with all necessary items that a new mum and her baby need.

With survival under threat the bare minimum needed is €300,000 a year. “But to really run our children’s programmes properly we need €600,000. We’ve no state funding from either state. In the beginning the Irish state gave us money when it was common for them to give money to various programmes but they stopped that about ten years ago.”

“The biggest gift we’ve given our children in 17 years is we’ve given them back their self esteem. Many of the To Russia With Love children think they are normal and that was my goal at the very beginning. In Russia orphans don’t go to college but 67 percent of our children go to college and are successes. None of our girls are prostitutes; none of our girls are trafficked. Not one of our boys in 17 years has gone back into prison and something like 90 percent of Russian boys coming out of institutions go back because all they know is institutionalised life. Ours don’t do that. We don’t have runaways because they know they are loved where they are.” One of Debbie’s orphans is a lawyer now.

Despite the evident changes made in the lives of her extended family, three years ago this strong woman faltered. “I hit a wall for the first time. It was really when Ireland had crashed and I was exhausted bartering money from the country. I felt bad even asking Irish people for money because I knew nobody had it. It’s a small pot in Ireland – people see me coming and I’m sure they run a mile!”

Debbie opened a Moscow office in an attempt to raise funds from elsewhere. She describes Russians as decent people with big souls but they have a trust issue: “They’re not inclined to trust westerners so they certainly aren’t going to give me money to spend on Russian children. In saying that it is now becoming a bit trendier in Moscow to give to charity. We are three years there now banging the drum! One of the big companies there gave us a large grant last year so it is beginning to turn for us. At the same time we are still 99 percent dependent on Irish generosity.”

Debbie’s life is split between Ireland and Russia. She visits the orphanages every six weeks, crediting her solid family structure for allowing her to maintain the hectic travel schedule. With two books under her belt, a charity shop opened earlier this year and an animated feature film telling the story of their Russian orphans, Debbie is driving fundraising using every avenue possible.

Expansion plans are dismissed with a laugh, as funds are so tight. “I beat myself up when I see something that needs to be done and don’t have the money to fix it. So ‘no’ to expansion but I do hope I’ll be in Russia until the final orphanage closes and a proper foster system is running. I don’t know how long that will be but [President Vladimir] Putin had a plan that all the orphanages would be closed by 2018. Maybe I can retire then.”

This article was originally published in the Winter 2014 issue of WMB Magazine. If you would like to nominate yourself or someone else for the Newstalk WMB Social Entrepreneur Award 2015, click here>>