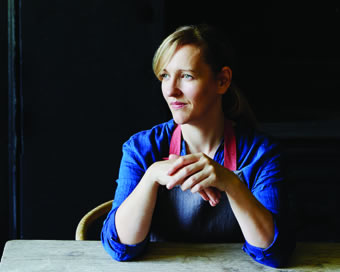 Designer Helen James has been well known on the fashion circuit in Ireland for many years. A native of Dublin, James spent much of the Nineties living in New York, and returned there for a stint in 2010.

On both occasions she worked as a designer for Donna Karan and now brings her design nous and love of cooking to her Considered range of homeware, cookware and artisan foods for Dunnes Stores.

Helen’s range for Dunnes Stores sees a holistic marriage between her twin loves of design and cooking in a collection which is tactile, simple yet attractive and includes food which is locally produced with an emphasis on taste and quality. For a perfectionist such as Helen, having absolute control over a brand that she was putting her name to was vital. “My name is on the brand so only one person can sign off on it,” she says. “My personality is very much in the brand. People who know me say that it really feels like me.”

Helen began designing during her student career at NCAD in Dublin where she studied textile design. Moving to New York in 1993, she worked as a freelance ‘surface designer’ (printed textile designer) for international brand Donna Karan before going on to establish her own label. Helen’s hand-printed silk scarves sold very well – first in New York and then in Ireland to where she returned in 2002. Her designs were stocked in high-end boutiques including Costume in Dublin and Kalu in Naas as well as Harvey Nichols in London and shops in the Middle East.

Becoming pregnant with her third child six years ago coincided with the downturn in the economy and Helen decided to take some time out to re-evaluate, despite the fact that sales had doubled every year since the brand’s inception. “I looked at my bookshelf one day and all my books were interior and cookery books and I realised that my heart wasn’t in it anymore. I also never really considered myself a fashion designer but ended up doing that and I began to feel that it wasn’t me.”

Four years ago Helen got a call from a friend in New York asking her if she would like to do a freelance consultation job, again for Donna Karan but this time in homewares and Helen leapt at the chance, packed up the house and set off for the Big Apple with her husband and three children.

“I went over and did a project for a month and following that I was offered a fulltime job. I did that for a year and it was a whirlwind, I learned so much, but ultimately a year was enough – it’s very hard to go from a house in Westmeath with three bedrooms and a field and a garden to living in an apartment in New York and being gone from 7am to 7pm. It was amazing career-wise, but if the kids aren’t happy – forget it!”

After a stint at Avoca, Helen was approached by Dunnes Stores and it was decided that she would create a new brand for the company. Presenting to Margaret Heffernan CEO, Helen found herself proffering a brand which united the food and fashion side of the business. “It was a natural fit with Dunnes because they have both the grocery and textiles side of the business and nothing had been done before to bring the two sides together,” she says.

The new range is about functionality and style, clean lines and texture. “If you have a storage jar why should it not be beautiful as well as functional? Being a cook, things have to do their job and earn their place,” declares the designer.

Helen says that the incredible engine of Dunnes Stores really allowed her to “put her ideas into reality”. Designing and producing on such a scale (particularly the food side of the range) was a huge learning curve but she had the benefit of learning from people who are expert in their fields. “I couldn’t possibly have done this on my own but in here it was relatively straight forward — I knew what I wanted and they knew how to get it for me. They are experts — from the people who ensure that the right amount of stock is on the shelves to those who ensure that the food labels are correct.”

Helen has had a hand in the design of every facet of the collection and even the in-store fixtures and fittings did not escape her touch: “I was conscious that it wasn’t a standalone store and I am not there speaking to the customer so the customer needs to be able to get a sense of what I am trying to say by walking in and picking up a jar.”

Helen believes that her collection is part of a wider mood at Dunnes to offer something a little different and unique to their customers at an affordable price. Designer collections at the retailer include the Willow children’s collection by Leigh Tucker, Carolyn Donnelly Eclectic and Paul Costelloe’s ranges for the retailer.

Helen says that she learned her love of food from her grandmothers – “excellent bakers” both – and from her parents who are “excellent cooks”. She says that although she has been baking and cooking since the age of 12 that she hadn’t considered that it could be part of her job until starting a blog in which she began to champion her love of cooking.

Blogging and social networking is, she believes, an essential part of how she works with the Considered brand and readers may be surprised to click onto the Dunnes Stores website and see blog posts from its creator. “[The blog] was something that I fought for. I think it goes with the brand – I think it is so important and I think that people almost expect that now. It’s an incredible way of engaging with the customer and them with your brand. And also, because I am not meeting every customer I wanted a way to connect with them and to portray a vision of the brand to the customer.”

The design landscape has changed greatly in Ireland since Helen first established her eponymous brand and even more so since Dunnes Stores was established way back in 1944, but so too, says James, has the food. She believes that the design arena is still a difficult one for young people to get involved in and that having a team of experts to work with at Dunnes has allowed her the freedom to concentrate on the brand in a way she never could as a sole trader. She says she also finds it a rewarding way to work.

“Having been my own boss for so long I wondered, at the time, would I be able to work with the team at Donna Karan but I loved it. That really surprised me as I thought I would struggle with that. But being a designer working on your own can be lonely. Bouncing ideas off friends is wonderful but it’s not the same as having a team behind you, as I have at Dunnes, who all have the same vision of getting the best product on the shelves. I could never now go back to working on my own again!”

The new Considered range is about good functional design and a beautiful aesthetic and Helen James believes good design is just that. “You can’t fake it and you can’t bottle it, it’s either there or it isn’t – it’s almost intangible but you just know it when you see it.”

This article was originally published in the Winter 2014 issue of WMB Magazine. Helen is speaking at this year’s WMB Conference & Awards.

If you know the name Ramona Nicholas it may...

There’s a new buzzword in town and it’s...