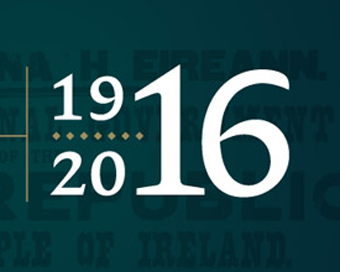 In the early months of 1916, the basement of Liberty Hall was turned into a munitions works with scores of women and girls working. One of those was Helena Molony (1883 -1967), who became the Secretary of Irish Women Workers’ Union.

Helena joined Maud Gonne’s Daughters of Ireland (Inghinidhe na h Éireann), a group of women activists that formed in 1900 as they were prohibited from joining male nationalist organisations. Helena was best known as the editor of their paper Bean na hÉireann – ‘A women’s paper, advocating militancy, separatism and feminism’ – which she later described as “a mix of guns and chiffon”.

She was a member of the Irish Citizen Army and took part in the Rising alongside members of Cumann na mBan, the women of the Hibernian Rifles, and the girl scouts ‘Clan na nGaedheal’, which had been founded in 1910.

There were also those not attached to any organisation, who volunteered. They were dispatch carriers, or ‘basket girls’ bringing food. There are documents that show that the 300 women who took part were ten percent of the fighting force in Dublin, Wexford, Galway and Meath.

Helena Molony was in the City Hall Garrison alongside the Chief Medical Officer of the Irish Citizen Army, Dr Kathleen Lynn (1874-1955). She described herself as “a Red Cross doctor and a belligerent”. When she told the arresting officer she was a doctor, but also belonged to the Irish Citizen Army, it surprised him very much. However as the years passed, their part in the Rising was often questioned.

Two decades later Helena Molony said in a radio interview on April 16th 1963 that she was constantly asked what did the women do. She replied: “I feel they might as well ask me what did the tall fair haired men do in wars and what did small men do. My answer in both cases is the same, they did what came to their hands to do – day to day, whatever they were capable of by aptitude or training.”

It is perhaps not surprising to learn that members of the Irish Citizen Army produced the highest-ranking officers in the Rising and a number of Cumann na mBan joined the organisation for the duration of the Rising. Countess de Markievicz was the only woman sentenced to death for her role as second in command at St Stephen’s Green/the Royal College of Surgeons – she was appointed by Michael Mallin, who was second in command of the ICA overall. Her sentence was commuted to life in prison but she was released in 1917.

Many of the women who took part in the Rising and War of Independence opposed the Anglo-Irish Treaty that ended that conflict. They did not support the establishment of the Irish Free State, and the partition that followed. They would suffer poverty, imprisonment (nearly 1,000 women were interned by the Irish Free State during the Civil War including the Countess), ill health and, in some cases, premature death because of their stance.

The Civil War had a major effect on the participation of women in politics in the Irish Free State. Women despite their franchise did not play a major role in the positions of government. The exception was Countess de Markievicz, who was named the Minister for Labour in 1922 and held the position for three years. However, as has been widely discussed during the recent general election, it was 58 years before another woman sat in the Irish cabinet. Máire Geoghegan-Quinn was named Minister of the Gaeltacht in 1979.

This year Ireland elected the highest number of female TDs yet (35) and while it’s progress, these women were fighting in 1916 for more than 22% representation. We should remember the words of Nora Connolly O’Brien, James Connolly’s daughter, who wrote in 1932: “It is regrettable that Irishwomen… having won the right to share the dangers of war, they should have relinquished the right to share in the dangers of peace. Revolutionary women are today showing once more that damnable patience and content to be the drudges of the movement…”

In 2016, thankfully Irish women are no longer content to be the drudges of the movement.

Did you miss the first installment of Women Workers in the 1916 Rising?

Part One: Women Workers In...