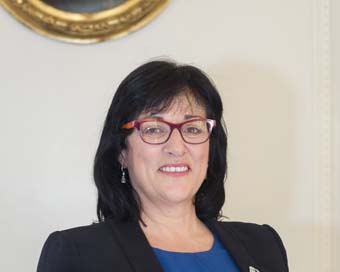 Anne Heraty is one of Ireland’s best known businesswomen and the 2014 recipient of the WMB Businesswoman of the Year Award.

From observing the workings of the family business run by her mother, to founding and running Cpl Resources, a plc with a turnover of over €330m annually, her career has been characterised by hard work with a common sense attitude.

After doing a degree in Maths and Economics at UCD and working in telesales and direct selling, Heraty fell into recruitment, almost by accident. She loved it, and in the nascent tech scene of the 1980s, realised that she had found her niche, although it was the sales training that gave her an understanding of people and business she’s had ever since.

“In 1989 the tech sector was small, I had done some tech in my degree and I had been interviewing different people in the tech sector. I realised that the only way to advise people well in their careers was to specialise in the sector.”

Cpl now has 36 offices in nine countries, sourcing and placing staff across sectors stretching from IT, engineering, science, pharmaceutical, sales and marketing, healthcare, banking, insurance, and everything in between. The company also offers a wealth of support services from training and development to executive search selection. In 2006, Heraty was named Ernst & Young Entrepreneur of the Year, and the company is the only recruitment group listed on either the Dublin or London Stock Exchanges.

She had no idea when she founded Cpl in 1989 that Dublin would become the EMEA tech hub it has. But she, and Cpl, were in at the beginning of an industry that has come to define the country.

“There were and are so many great software companies, and multinationals. Cpl is still very strong in tech, we work with most of the top ten tech companies that are here, and we are still very close with the indigenous tech sector – some of the companies are really fantastic.”

As workplaces, Google and Facebook are the stuff of legend. What ‘nine to five-er’ in an SME with barely a working kettle hasn’t longed for the beer fridges, slides, free restaurants and onsite swimming pools they’ve seen in news broadcasts about jobs announcements? But it’s not as simple as that, according to Heraty.

“They certainly have a great culture and are great places to work,” she agrees, “but they have high standards too. It’s really about finding the right fit. There is a job for everyone and fitting into the working environment is important.”

Being her own boss was not always Heraty’s priority, although she does acknowledge that doing a start your own business course right out of college probably influenced her in that direction. Nowadays, of course, she runs Cpl with her husband Paul Carroll, who is Business Development Director, and the company is quoted on the stock exchange, meaning that in one way, she is no longer her own boss.

“I am answerable to the board of directors and to shareholders, so in that sense I am no longer my own boss. It’s not difficult [answering to the board] – we are all aligned in the best interests of the company and the shareholders. The other thing that is fantastic about having a board is having access to the expertise, and the advice is terrific. The people make the difference.”

And with that, she’s brought up a sticky subject. Although she is something of a role model for Irish businesswomen, Heraty is the only woman on her own company’s board. “It’s just the way it turned out. Now there is one; there were two. I always like to see women there.”

She has said in previous media interviews that she is not a fan of quotas, but says she believes more needs to be done to support women at senior levels in business, because they drop out before they are ever at the level of potential board membership.

She believes the targets now in place for FTSE 100 companies in the UK are working and says they are the way to go. In the FTSE 100, women’s representation on boards has increased to 22.8 percent – up from 20.7 percent in March 2014 with the target of 25 percent for 2015. “It’s really important to help good female executives to build their careers and skill sets so that they are ready and open to those opportunities.”

Working across demographics, she says there is a real change coming with ‘millennials’ – those born from the 1980s onwards – for whom parenting together is far more the norm. “My experience in our own company is that we see this coming through much stronger with the millennials; for them fairness and equality is for fathers too.”

Her insight into the jobs market is probably unparalleled in Ireland: In any one week Cpl has more than 7,500 contract staff on customer sites, and the company placed over 22,000 people in jobs last year.

The recent controversy about zero hours contracts notwithstanding, she says the Irish labour market’s strength is in the desire for flexibility from employees, who may be juggling college or parenting, or may only want seasonal work.

“In the last six to eight months the employment figures have shown a move from part-time to full-time work… but many people are moving from full-time permanent to part-time work… the shape of work is changing,” she says.

To those who are recruiting but may not have the kinds of resources Cpl has, she has a few words of advice. “Don’t think there’s a single thing. Remember the importance of your employer brand. Understand the skill sets you require, not just academic and technical, but the cultural fit.”

Employer brand is one of those intangibles that many smaller companies in particular may struggle with. “Employer brand is not what you think, but what people are saying about you. It’s easy with social media to find out what’s going on and you want a good culture and environment… it’s very easy for a prospective employee to find out anything they want on social media.”

She does have some advice for young employees. “Go for difficult assignments. Take on challenges. Be confident in your own skin, build your self awareness and your emotional intelligence. Build your career and your future.”

Good emotional intelligence, she says, brings strength and depth to teams and is something the best leaders of both sexes have.

Now that she’s WMB’s Businesswoman of the Year, she’s something of a role model. Her own role model is her mother Jean, who ran a family shop, pub and farm after Anne’s father passed away at a young age.

Those wondering what Heraty’s own secret is, will be out of luck. “There is no secret really to success. Hard work… luck… being in the right place at the right time.”

This article was originally published in the Winter 2014 issue of WMB Magazine. Anne Heraty is speaking at this year’s WMB Conference & Awards. If you would like to nominate someone or yourself for the WMB Businesswoman Award 2015, click here>>